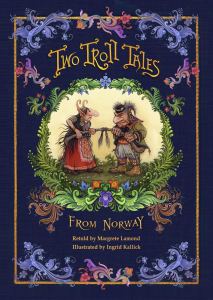 Retold in lively and authentic style by Norwegian-Australian author Margrete Lamond, and sumptuously illustrated by Norwegian-American illustrator Ingrid Kallick, these stories of magic and mischief from Norway will enthral young readers!

Award-winning illustrator Ingrid Kallick’s work has been featured in magazines and books, including in the Once Upon A Christmas anthology (Christmas Press 2014). Her work was selected for the Society of Illustrators Los Angeles shows in 2013 and 2015, with a bronze medal in 2015. Her magazine covers won the SCBWI Magazine Merit Award in 2012 and 2015, while her selection for the SCBWI stand at the Bologna Book Fair in 2014 received an honourable mention. Two Troll Tales from Norway is her first picture book.

Two Troll Tales from Norway is available from all good bookshops around Australia.

A small press with big ideas. View all posts by christmaspresspicturebooks

1 thought on “Publication day for Two Troll Tales from Norway!”