Christmas Press will be going to Sydney next week–first to be part of the SCBWI Conference, and then to cheer on our author John Heffernan as he presents his beautiful book with us, Two Tales of Brothers from Ancient Mesopotamia, in two special events.

On the Monday of the conference we’ll be viewing the Illustrator Showcase, and looking forward to seeing the work of new and established illustrators! We’ll also be conducting a manuscript critique and appearing on a fabulous panel at 2pm about building a brand while maintaining your passion. Our books will also be featured in the conference bookshop and we’re looking forward to meeting authors, illustrators, readers and publishers! 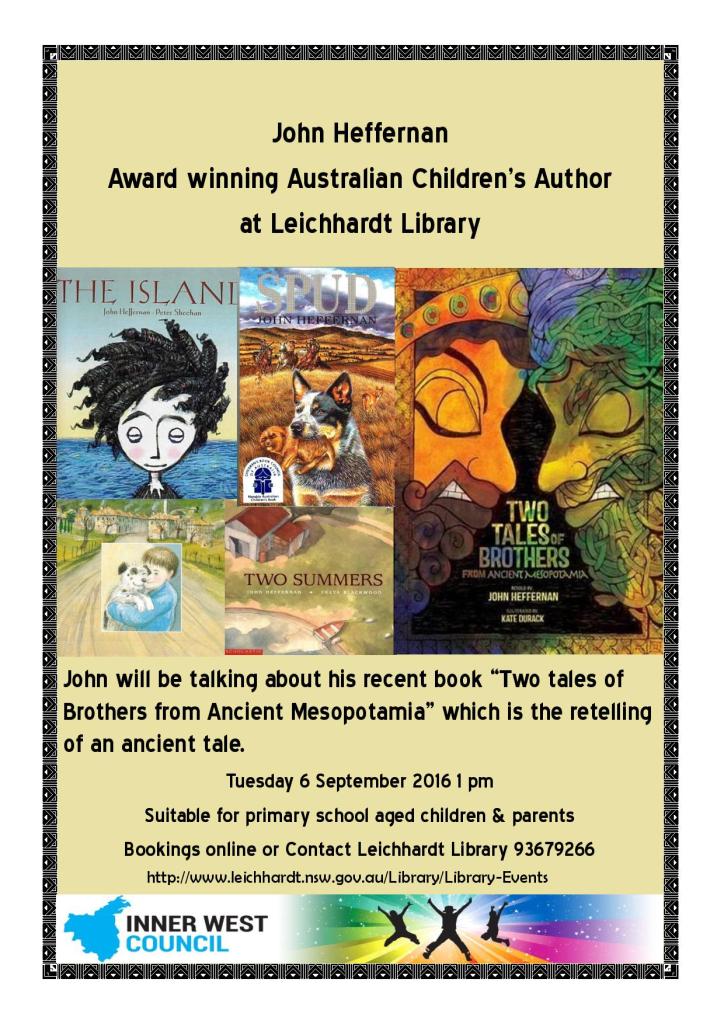 On Tuesday 6th, John Heffernan will be giving a talk at 1 pm Leichhardt Town Library; and will also present at a SCBWI event at 4.30 pm on Wednesday 7th, at the Children’s Bookshop in Beecroft when John will be part of a stellar panel of authors and illustrators from Australia and New Zealand. Both are free events, all welcome. Two Tales of Brothers will be available for sale at both these events, and John will be happy to sign them for you!

Absolutely fantastic event last night at Walcha Gallery of Art, celebrating John Heffernan and Kate Durack’s gorgeous book with Christmas Press, Two Tales of Brothers from Ancient Mesopotamia. The evening featured a great exhibition of Kate’s original art from the book and a fabulous talk by John about the experience of writing the book, and the extraordinary Epic of Gilgamesh, which is the source of the stories he retold. The big,enthusiastic crowd just loved it and all the stock of books went in a flash!

Fiona McDonald and Sophie Masson represented Christmas Press at the celebration, and had a lovely time!
Thank you to the Walcha Gallery of Art, Reader’s Companion, and everyone who helped make this such a great event. And congratulations to that fantastically creative duo, John Heffernan and Kate Durack.

We are going to be at Book Expo in Sydney this weekend, showcasing our beautiful books, merchandise and exciting things to come. And our fabulous author Duncan Ball will be there on both days doing events. Come and see us there and say hi! By the way, we still have a few free tickets available… email us for details on contact@christmaspresspicturebooks.com

And check out our Facebook page for Book Expo updates.

Fabulous news: we have won a small business grant from Australia Post,as part of their Our Neighbourhood Grants for 2015!
The official announcement from Australia Post is here:
http://ourneighbourhood.com.au/grant-winners/christmas-press-2015.html
The project we specifically applied for is an exciting new venture: Second Look, a special new list within Christmas Press, featuring new e-book and POD editions of fabulous out of print books by well-known Australian children’s authors, giving them new life and enabling new access to them both in Australia and overseas. Plays, poetry and fiction will be featured in the Second Look list, which will debut in 2016. Launch title will be Duncan Ball’s great collection of comic plays for kids, This School is Driving Me Nuts and other plays, fully revised and with a new play added, and with the original illustrations by Craig Smith (with kind permission of Harper Collins). Duncan’s book was originally titled Comedies for Kids, and was published by Angus and Robertson in 1988. We are absolutely delighted to be giving this great title new life and making it accessible to a new generation of young readers– and performers!

Two other titles, yet to be decided, will also be published in Second Look in 2016.
We are thrilled to receive the Our Neighbourhood grant as it will really help with the costs of the set up for the Second Look list and first three titles, and it’s also a fantastic validation of not only the idea, but of us as an innovative and creative business!
March 16, 2015March 16, 2015 christmaspresspicturebooks

Eagle Books, the brand-new fiction imprint of Christmas Press, are thrilled to announce that our launch title will be the first English translation in over a hundred years of one of the best adventure novels of all time, written by one of the most popular writers of all time: Jules Verne’s Mikhail Strogoff.
First published in French in 1876 as Michel Strogoff, it is a rip-roaring tale of adventure and suspense, painted with romance and humour and set in pre-revolutionary Russia. Suitable for both adult and young readers from 11 and up, it is a book that’s inspired countless film and TV adaptations all over the world.
In France, it’s been a huge success from the word go, and has never been out of print, with most people considering it to be Verne’s best novel. But it has dropped out of sight in English-speaking countries as the original English translation–published well over a century ago!–is rather stodgy and dated for modern tastes.
But in Stephanie Smee’s perfectly-pitched, lively translation of the original 1876 French text, the first such translation in over a hundred years, English-speaking readers can discover for themselves just why this novel has such an enormous following not only in France but all over the world.
Stephanie is a Sydney-based translator who turned in a legal career to combine her true loves of literature and French. She is responsible for introducing the enormously successful works of much-loved French author, the Countess de Ségur, to a whole new generation of English-speaking children, and those translations have been bestsellers.
To celebrate this major publishing event, we have just today launched a crowdfunding campaign to fund production of a beautiful collectible limited edition, not available on the general commercial market(commercial hardcover and paperback editions will follow later).
This exclusive collectible edition will be limited to 750 hand-numbered copies, with internal pages of soft cream paper, and each chapter featuring a delicate black and white illustration by artist David Allan. The cover will feature a full colour illustration by David Allan, set into high-quality textured red hardback binding, and the book will feature other special elements, such as coloured end-papers, a satin bookmark, and gold foil detail on front, spine and on book block edges.
This beautiful book will be available to Australian and New Zealand contributors for a pledge of AUD $55, postage included, and to all other international supporters for AUD $75, postage included. There are also many other levels of support, from $10 to $1000, and some truly fantastic perks for contributors, from commemorative bookmarks to playing cards, limited edition prints of the illustrations, authentic 19th century prints featuring Russian scenes, hand-painted book plates, and more.
The campaign will run till May 16, 2015.

We invite you to join us in bringing back this fantastic novel to English-speaking readers!

Saturday, December 6th, saw an absolutely fantastic celebration of Once Upon A Christmas at the iconic The Children’s Bookshop, in Beecroft, Sydney. Lots of our wonderful contributors came, including some from very far away–Juliet Marillier from WA and Victoria Nugent from far north Queensland–and a great time was had by all! There were readings, interspersed with Christmas carols, beautiful accompanied by multi-talented illustrator Lisa Stewart on her violin, lucky door prizes, and a crush at the signings! Thank you so much to all who came, and to Paul McDonald for hosting us in his gorgeous bookshop! Here are a few photos from a great afternoon.

A lovely time was had by all in the beautiful surroundings of Granny Fi’s Toy Cupboard in Uralla, at the local launch of Once Upon A Christmas!